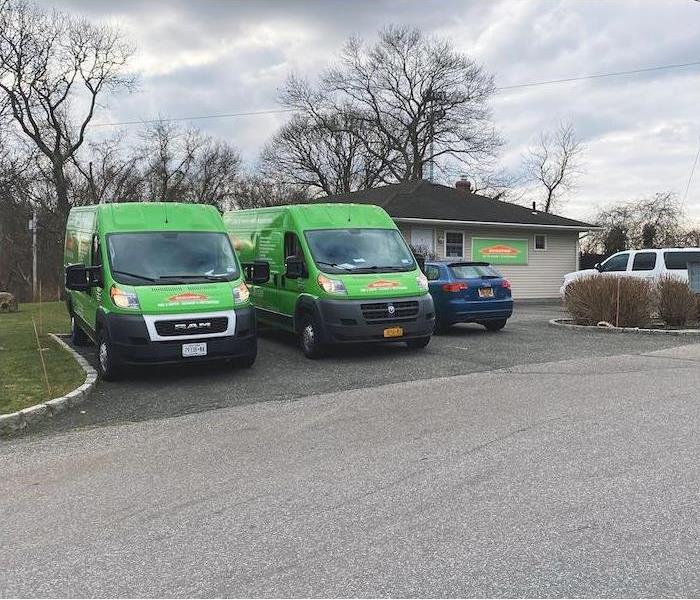 SERVPRO professionals are trained to handle every level of storm damage. Call us today, we are always available.

Smithtown got established uniquely. In 1665, a local settler named Richard Smith rescued a local Native American chief's daughter abducted by a hostile tribe. After his daughter's return, the chief told Smith that he would get granted all the land he could encircle within one day on a bull. The longest day of the year is the summer solstice in June, and that is the day Smith chose to ride and claim the land that he initially named "Smithfield."

Smithtown has several interesting venues that appeal to both locals as well as visitors to the city. Harmony Vineyards has a gorgeous vineyard terrace that overlooks the planted grapevines and has a good view of the waterfront. This place has regular outdoor musical performances in months when the weather permits. Other fun activities include a regular movie night where guests can bring their own blankets, chairs, and snacks and enjoy watching a flick on the three-story outdoor movie screen while sipping the on-site produced wines. One of the most popular events is the "Tasting Notes Jazz Club," which happens on Thursdays and Saturdays where patrons can listen to different jazz genres while tasting various wines. A portion of sales gets donated to various charitable causes.

The Statue of Whisper the Bull was created in 1903 by Lawrence Smith Butler, a direct descendent of the town's namesake and founder, Richard Smith. Butler wanted to make the sculpture of the bull and set about training money for the task. The cost of the project was $12,000, and the casting was completed in 1923. The funds to shop the bull statue to Brooklyn did not materialize, and it remained in front of the Brooklyn Museum for several years. In 1921, Butler went back to Smithtown's town board and asked for the funds to create a concrete pedestal for the statue. The statue was moved by train to the town of Smithtown and set up in the square area to commemorate the town's founders.

What Do Smithtown Homeowners Need to Be Aware Of After Storm and Flood Damage?

In the lapse of time between the flood damage in a Smithtown home and the arrival of SERVPRO, there are many actions a homeowner can take to lessen the number of ruined items in the house, such as:

SERVPRO technicians scope both the exterior and interior to determine if any emergency repairs need to get made. One of the most common is tarping over a damaged roof to halt any further water from entering. Once the restoration help gets completed, this SERVPRO location holds a general contractor license #51995-H and can offer repairs and reconstruction services as needed.

SERVPRO of Greater Smithtown at (631) 265-9200 brings years of experience and the professional equipment to restore local Smithtown homes from any size flood damage.